Skip to content
Home
News
What is a HEIC file? 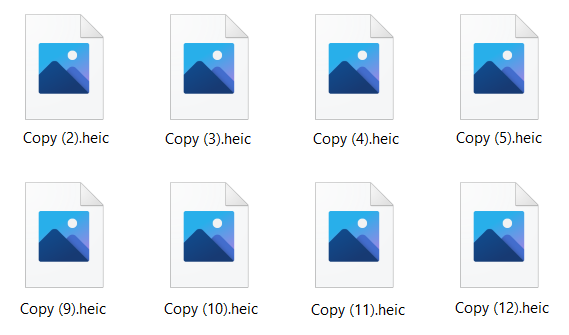 HEIC file format is often associated with Apple devices, but it is developed by MPEG (Moving Picture Experts Group). Even though HEIC is not without reason called High Efficiency File Format, it is still not widely accepted on major operating systems, web browsers, image manipulation applications, etc.

HEIC gained its popularity in 2017 when Apple introduced it as the default image format on iOS 11 and Mac OS High Sierra. Since then, Google enabled support for this format on Android Pie in 2018. Microsoft also provided support for the HEIC image file by installing a free extension that, since October 2018, comes pre-installed on newer releases.

Apple’s response to compatibility issues was adequate. That is why users of iOS devices have options to automatically convert their HEIC/HEIF files in JPEG when trying to send or share their images.

Even though it may be confusing at the difference between HEIC and HEIF, both extensions can be found on Apple devices. The HEIC file is a container for HEIF images or image sequences. The codec for this type of file is HEVC; that is, in fact, h.265.

Read more about the HEIC file in the following, its advantages and disadvantages, and which image format is better HEIC or JPEG? If you want to use the HEIC format, it will be useful to know how to open or edit this type of file. If you would rather deal with JPEG, there is more than one way to convert your HEIC images to JPEG format.

There is also a way to avoid taking pictures in this format on your iPhone that can save you some trouble dealing with unfamiliar files. Let’s start by getting to know the HEIC file format in detail.

Apple’s primary reason to adopt HEIC image format as default on all its devices is its advanced compression algorithm. Because of this, HEIC images can be half the size of the JPG photo without losing image quality. That brings a lot of improvement regarding storage space on the iPhone, iPod, and other Apple devices. With the increase in camera resolution on newer devices, the size of JPG images increased considerably. That caused a shortage of storage space. Even though the HEIC format can solve this issue, this image format is not still widely accepted. Summarized features of HEIC format include:

There aren’t many disadvantages to the HEIC format. There are some rumors about patent issues and, of course, compatibility issues. While users of iOS 11, Mac OS High Sierra, and later releases have no problems viewing this format, earlier versions do. Even though HEIC has all predispositions for succeeded JPG format, this will not happen any time soon. Until the rest of the significant players do not adopt this format, HEIC doesn’t have much chance to become the number one image format.

Take a closer look at HEIC and JPEG format to understand which is better and why. Even though there is no enormous difference between images in these formats to the naked eye, we should compare other important features.

You’ll also have no issue sending, sharing, publishing, or editing JPEG files in any way.

While HEIC’s compatibility is still limited, it beats JPG in compression efficiency to reduce file volume in half with kept image quality.

Because HEIC format supports a 16-bit color palette versus JPGs 8-bit, it has richer tones.

Also, HEIC is a container that can contain image sequences, while JPG can contain only one image file.

Modifying HEIC images is easy, and it involves different layers. You can even rotate or crop them without saving your image twice.

How to open the HEIC file on Windows and Mac OS?

Even though HEIC file format has been around a few years now, Windows 10 still doesn’t have native support for this image format. Although there is a free extension, you can download from Microsoft Store to view HEIC images with default Windows image viewer Photos. If you still can’t open the HEIC image file, you should try associating your files with software that opens this format. Examples of image processing apps that can open files like these are Paint.NET, GIMP, Photoshop,

On Mac OS, you can use Preview and Photos app to view HEIC image files.

How to edit the HEIC file?

Editing HEIC format is not supported in many image processing apps. Luckily, there is more than one utterly free image processing app that can solve all your problems. You can use them as HEIC file viewer, but also edit your images in the original format.

The first one is GIMP and has a multitude of options for photo processing. Not only does this app has support for layers but also various filters, effects, brushes, and much more image manipulation options. Besides support for HEIC image type, GIMP is also compatible with BMP, GIF, JPEG, PDF, XCF, PNG, PS, PSD, SVG, TIFF, and many more image formats.

Another great free app that can handle the HEIC format is Paint.NET. It also has layers and many useful options such as unlimited undo, special effects, etc. You can also add a wide variety of plug-ins to enhance further this tool that is far from a simple app for viewing HEIC files. Paint.NET can also open PDN, PNG, JPG, JPEG, JPE, JFIF, EXIF, BMP, DIB, RLE, TIFF, TIF, GIF, TGA, DDS, JXR, WDP, WMP, AVIF, and WebP file type.

Even though Photoshop is on the expensive side of image processing apps, you’ll be happy to know that as of recently, you can open and edit HEIC files with it. There is just one tiny condition, and that is to have an active paid subscription.

To edit your pictures with more popular image software, you’ll need to convert them in a more compatible format, such as JPEG.

How to convert HEIC files to JPEG file format?

The easiest way to view and edit your HEIC format is to convert them in a more compatible image format, such as JPEG. It is possible to convert HEIC to JPEG file format with image processing software or an online-based converter.

Among image processing apps that support viewing and perhaps editing HEIC format, there are some free apps you already have on your PC, while others you’ll have to download and install.

How to convert a HEIC to JPEG on Windows 10?

For Windows 10 users default app for viewing pictures is Photos, which can open HEIC format if you install an extension from Microsoft Store. This free extension is HEIF Image Extensions, and it enables support for HEIC format on Windows 10 since this format is not natively supported on this OS.

Use the Photos app

Now you can use Photos as a HEIC file viewer, and in Edit and Create menu select the Edit option. That will give you access to the Save a Copy option, which can easily save your HEIC image in JPEG format. The only disadvantage of this process is that you’ll have to repeat it for each HEIC file.

There are more options for converting HEIC files to JEPG or other more compatible image formats with free software like GIMP. GIMP works on GNU/Linux, OS X, Windows, Mac, and more operating systems as a cross-platform app. It’s a free alternative to Photoshop, and you can use it to edit your HEIC files. If you plan on converting your HEIC files offline and having a neat app for image manipulation on hand, then GIMP is the way to go. You can also use Save as an option for converting HEIC to JPEG format without affecting the original file.

The fastest way to convert HEIC to JPEG format is with a free online converter that you don’t register for or install. Converter365.com is just all that and more. Among its best features is the conversion of multiple files simultaneously and download link directly on the website. All you need to do is head out to the HEIC converter category and upload your files. You’ll notice that you can choose among many image formats for conversion, such as TIFF, PNG, BMP, JPG, TIFF, NEF, GIF, CR2, etc.

Free online converter365.com is available on any OS with a browser and Internet connection.

How to convert a HEIC to JPEG on Mac OS?

Viewing and editing HEIC images on Mac OS later than High Sierra is natively supported. Also, there are plenty of ways to convert HEIC to JPEG format on this OS. You can use apps such as Preview and Photos to view the HEIC image type.

However, to edit HEIC files, it is easier to convert them to JPEG format with the Automator or use free online converter365.com.

Also, you can use Dropbox to open HEIC files on Mac easily and even convert them to JPEG with Save HEIC Photos as an option.

Another way to convert the HEIC file to JPG on Mac OS is with the use of the free image processing app GIMP.

How to avoid taking pictures in HEIC file format?

If HEIC format is a complication for you, then there is a simple way to stop taking pictures on your iPhone in this format. That can also save you the trouble of continually converting HEIC to JPEG images to ensure compatibility. First, enter your camera settings, and in the Format option, select the Most Compatible. Another option available is High Efficiency. If you want to switch back to taking photos in HEIC format, you can change it to that option.

If you are stuck with many HEIC files on your iPhone that you need to convert to JPG, a neat solution is to transfer them on your Mac. In prompt window Transfer to Mac or PC, choose Automatic. Another option is Keep Originals, and it will transfer your images in HEIC format.

This action is somewhat flawed if you want to save storage space. There is a bug that adds empty space on every file you transfer this way and wastes about 1 GB of space on each 1.5 GB file.

Because of this, you should transfer your files in HEIC format and later use any of the mentioned solutions to convert them to JPG.

It is a fact that the HEIC file format is superior to JPEG. However, its lack of compatibility makes it hard to view and edit. Even though there is a workaround about those issues, HEIC is still not that easy to handle. More and more image processing apps provide support for this innovative digital image format. The process is slow, but HEIC deserves to be widely accepted because of its superior compression algorithm that makes its files smaller up to 50% compared to JPEG with maintained or even better image quality.

The best free apps for manipulating HEIC files are GIMP, Paint.NET, etc. Even Photoshop provides support across all its versions for different operating systems for HEIC format. Nevertheless, Apple ensured that its users have the necessary options for the painless conversion of HEIC to JPEG format, which is still the number one image format.