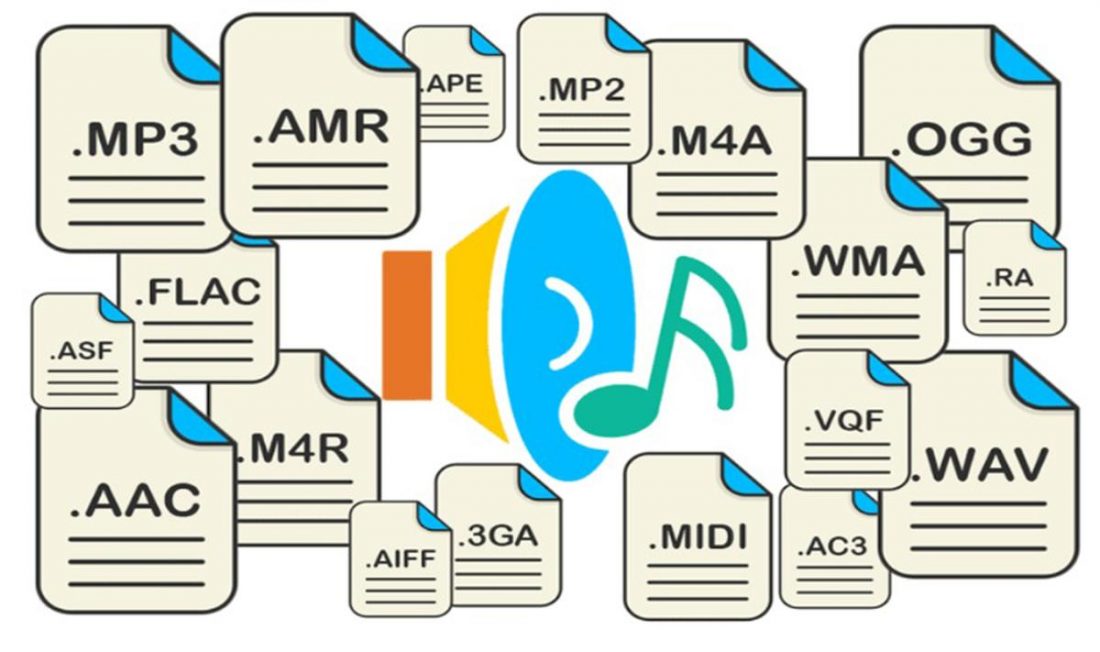 For starters, you have to know that there are three main categories of file formats, and those are:

These categories are made based on audio fidelity and file size. Some are better in quality, some are connected to specific devices and operating systems, and some have the perfect file size for social media. Which file format you want to use depends only on your needs and the purpose of a specific audio file.

Lossy file formats are compressed formats with the smallest file size. Sometimes, due to compression, they can lose a lot of the original sound data, but most of the time, we can’t even register the loss of information. Small in size and compatible with many different devices and programs, lossy file formats are widely used and the most popular ones amongst many types of professionals and people in general.

One of the most popular audio file formats is MP3 or MPEG-1 Audio Layer III. It is a lossy file extension that works on most devices. It is quite small in size and it can be as small as one-tenth the size of FLAC, ALAC or any other lossless file format. One of the main advantages of MP3 files over the internet for listening online that was previously not possible due to the large file sizes of audio files. Sound quality of an MP3 audio file can be controlled by parameter settings such as bit rate, sample rate, joint or normal stereo.

Advanced Audio Coding or AAC is an audio coding standard for lossy digital audio compression. It is similar to the famous MP3, except it archives higher sound quality. AAC is a default encoding method for iTunes and iTunes Store, as well as the standard audio file format for many other platforms and devices.

The main reason why AAC file extension is on our list of the best audio file formats is that it has a range of 48 channels, up to 96kHz sampling rates, and flexible joint stereo. Plus, this type of file format can also be stored in the M4A file extension that is used mostly for book content and digital music.

OGG or Ogg Vorbis file format is open-source audio coded used by one of the most popular digital music services – Spotify. It is also widely used for video game audio assets. It offers better audio fidelity that, for example, MP3 and may include song metadata, such as information about artist and track data. However, compared to the previously mentioned MP3, it is larger when it comes to size

We say that some format is lossless when it has lossless compression. It means that the file size has been reduced, and its original data is made smaller. Some may preserve all its quality, and some might lose a bit, but the spot on our best audio file formats list is reserved only for those that keep the sound quality as high as possible.

Free Lossless Audio Codec file known as FLAC is an open-source audio compression file format. The number one feature of this file extension is that it can compress an audio file down up to half of its original size. The best part is that there is no information loss during compression, which is, compared to other lossless file formats, quite an advantage.

The only disadvantage this type of file format has is its incompatibility with different audio players. Luckily, you can solve that problem in a few steps with any FLAC converter.

ALAC stands for Apple Lossless Codec and represents an audio coding format developed by a well-known company called Apple. It is usually found on the iTunes Store, and it stores music without losing any detail. It means that compared to the AAC file format, this one is identical to the source, except it is compressed. In case you are wondering, yes, it is true, ALAC is quite similar to previously mentioned FLAC.

Another great thing about this file extension is that you can easily convert it to any other format without losing any data, which is why this one deserves a spot on our best audio file formats list.

Uncompressed audio file formats are completely un-altered from its original state. They usually take up a lot of storage space, but the sound quality is good as it gets. Luckily, you can save your storage space capacity by compressing audio files to archive file category or simply changing them to some other audio file format. The most favorite and mostly used ones are WAV, AIFF, DSD, and PCM. That’s why they deserve to be on our list of the best audio file formats.

If you want an audio file format that retains all the original data, you should probably use Waveform Audio File, known as WAV file format. It uses containers to store raw audio data, track numbers, sample rate, and bit rate with the help of a well-known method called Resource Interchange File Format (RIFF).

Although this type of file format is used mostly in the professional music recording industry, it deserves to be on our list of the best audio file formats because of its sound quality. The only downside of using the WAV extension is the amount of storage space it requires. Luckily, you can easily convert WAV to MP3 or any other existing file format with our Converter365.

This format was developed by the famous tech giant Apple. AIFF file format is based on the IFF, which stands for Interchange File Format. Compared to the popular MP3 file extension, AIFF retains the much higher sound quality, but it also takes more storage space.

There is one thing about this file format that might confuse you, and that is the AIF extension on your Windows device. But there’s no mistake in the shorten version with one less letter – the AIF extension is the same one as AIFF on every Mac device. Plus, there is one more file format related to AIFF, and it is AIFF-C or AIFC that represents a compressed version of the original file.

DSD stands for Direct Stream Digital and represents a high-resolution format. This type of file format is quite specific compared to others, because DSD uses a single bit of information in the signal, while others use many bits. On the other hand, instead of sampling the information several thousand times a second, it samples 2.8 million times a second to generate the audio signal. Quite impressive, don’t you think?

DSD deserves to be on our list of the best audio file formats even though it is not currently mainstream. Why? Because it is still widely used.